Many people have a favorite Christmas Story or even Easter story, but I have a favorite Palm Sunday story. I’ll get to that later, but first let’s remember the reason behind this day:

And when he had said these things, he went on ahead, going up to Jerusalem. When he drew near to Bethphage and Bethany to the Mount of Olives, then Jesus sent two of the disciples, saying to them, “Go into the village in front of you, and immediately you will find a donkey tied, and a colt with her, on which no one has ever sat, on which no one has ever yet sat. Untie them and bring them to me. If anyone asks you, ‘Why are you doing this?’ you shall say: ‘The Lord has need of it and will send it back here immediately.'” So those who were sent went away and found it just as he had told them. And as they were untying the colt, its owners said to them, “Why are you untying the colt?” And they said, “The Lord has need of it.”

This took place to fulfill what was spoken by the prophet saying:

“Say to the daughter of Zion, ‘Behold, your king is coming to you, humble, and mounted on a donkey, and on a colt, the foal of a beast of burden.”

Then the disciples did as Jesus had directed them.  They brought the donkey and the colt and put on them their cloaks, and Jesus sat on them.  And as he rode along, most of the crowd spread their cloaks on the road, and others cut branches from palm trees and went out to meet him and spread them on the road. As he was drawing near—already on the way down the Mount of Olives— the whole multitude of his disciples,and the crowds that went before him and followed his, began to rejoice and praise God with a loud voice for all the mighty works that they had seen, saying, “Hosanna to the Son of David.  Blessed is the King who comes in the name of the Lord, even the King of Israel! Blessed is the coming kingdom of our father David!  Hosanna in the highest.  Peace in heaven and glory in the highest!”  And when he entered Jerusalem, the whole city was stirred up, saying, “Who is this?”  And the crowds said, “This is the prophet Jesus, from Nazareth of Galilee.”  And some of the Pharisees in the crowd said to him, “Teacher, rebuke your disciples.” He answered, “I tell you, if these were silent, the very stones would cry out.”

I have woven together the accounts from all four gospels, they can be read individually at the following links:

I don’t actually remember if it was on Palm Sunday, but it must have been around that time (you’ll see why in a minute).  We had finished the adult service at church, and I was going to pick Jacob up from his classroom.  He was either three, or had just turned four at the time.  As usual, I asked him what he had learned about that day in church. In a very serious tone, he explained that they had learned about the “triumperant entry.”  They learned that Jesus rode a donkey and all the people waved tree branches and shouted “Hi Ho! Hi Ho!” To this day, I can’t read the story of Palm Sunday in my Bible without picturing the seven dwarves. 🙂

Here’s a picture of Jacob from around that time: 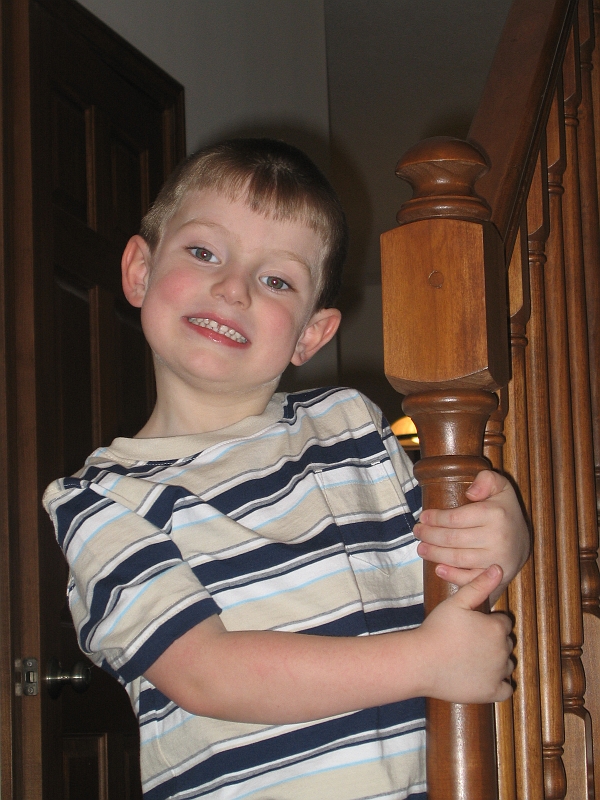