Finding the Pharaoh In You 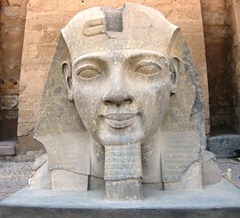 I am currently participating in the One Year Bible challenge from Kidmin1124.com.  This week, we are reading through the opening chapters of Exodus which set forth the Israelite slavery in Egypt and how God sent plagues to force Pharoah to let his people go.  As I read through the first nine plagues that God sent on Pharaoh:

one thought continued to run through my head:

Why did it take so much?  Why didn’t Pharaoh get it earlier and avoid the later plagues?  Why did he not listen to God and avoid the tenth plague – death of the the firstborns? It seems so obvious.  God wasn’t going to relent.  Surely there would be more coming if the their first couple of plagues didn’t work.  How many times was it going to take before Pharaoh “got it?”

Then I started to realize something.  I am no different than Pharaoh!  I have a heart which can be just as cold and stubborn as his.  I spent thirty years of my life denying the God who created me despite all of the “signs” God had put in my life.  To this day, I am not the obedient son that I want to be.  I still turn from him in times of trouble.  I still resist those things that He would have me do.  In the end, I am not that different from Pharaoh.

Monday Morning Prophecy #63 – The Messiah Would Have Complete Authority

What is THEOLOGY? (Dabbling in Doctrine)